“Do those who disbelieve not see

that the heavens and the earth were sewn together

and then We unstitched them

and We made from water every living things?

So will they not believe?”

These words are from the Holy Quran revealed more than 1400 years ago to Prophet Muhammed (SAW).

1. Big bang, the recent scientific finding of the beginning of Universe is beautifully revealed as

“the heavens and the earth were sewn together

and then We unstitched them”

2. All of us in 21st Century know that water is essential for the any form of life. Numerous space missions were sent to look for sign of water in our solar system  as finding water increases the chance of life in other planets.

We made from water every living things?

and the Surah ended with

So will they not believe?”

Because disbeliever demanded  to see more scientific facts in the Holy Book.

The usage of word and grandiosity of the Verse which was revealed more than 1400 years ago is more than enough to prove that Holy Quran is a divine revelation.

All content provided on this blog is for informational purposes only. The owner will not be liable for any misrepresentations and/or modifications of the information in the form contained herein by any third party or any losses or damages from the display or use of this information, nor does the owner make representations as to the accuracy or completeness of information found by following any link on this site.
بسم الله الرحمن الرحيم
If We wished We could send down a Sign to them from heaven before which their heads would be bowed low in subjection.
(26:4) 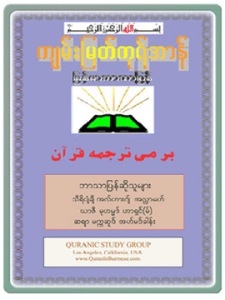 Learn and Understand the Holy Quran

An Invitation to the Truth

Minority Muslims of this world

are pious children who pray for their parents,

his knowledge which is still useful to others,

and his charity that continues to benefit the needy."

" You must not lose faith in humanity. Humanity is an ocean; if a few drops of the ocean are dirty,the ocean does not become dirty"

Search within this blog

Myanmar at a Glance